A couple of years ago I had my first taste of plantains at a local Mexican restaurant that served  plantains with black beans and sour cream. It was love at first bite and I was hooked! Since then I have made a healthy version of baked plantains at home. When I saw this menu on Healthy Girls Kitchen  for Caribbean Rice, Black Beans and Baked Plantains I immediately bookmarked it to make. The entire meal is pretty easy to assemble and I have already made it twice! 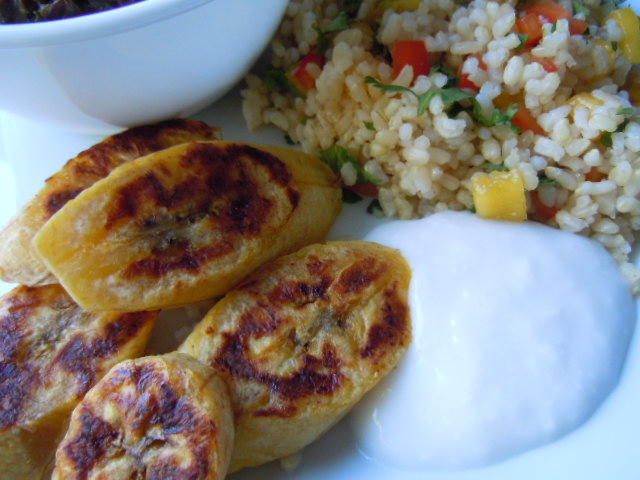 The first time I made the dinner we had daughter Katy and her husband Esau over to share the meal. The white dipping sauce for the plantains is non dairy yogurt with unsweetened shredded coconut mixed in. Simply scrumptious! Although everything was tasty the plantains were a little drier than I would have liked. Esau shared with me that when his sister makes baked plantains she only cuts them the long way and bakes them in two halves which keeps them more moist. I took his advice and tried it. 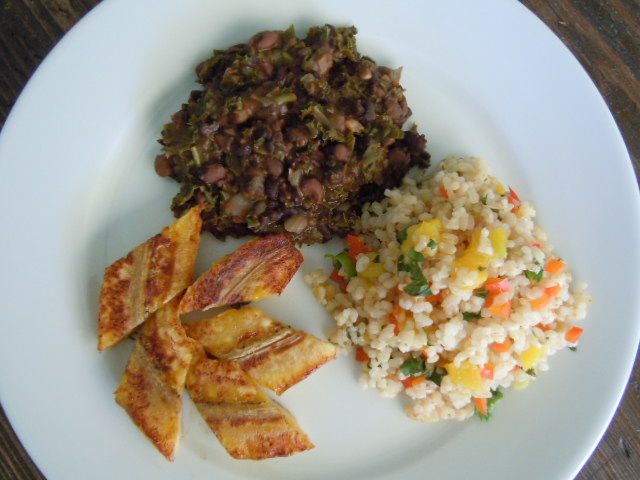 The Plantains with Coconut Dipping Sauce were so moist and soft inside yet caramelized on the outside. Perfection! I will always fix my plantains this way from now on.  The Caribbean Rice is a simple mixture of mango, cilantro, bell peppers, brown rice, lime juice and green onions. Cuban Black Beans With Kale are seasoned with a medley of spices and made even more healthy with the addition of  kale. No need to tell anyone this is a healthy meal – they’ll love it because its so beautiful and delicious!

Enough talk – lets get to the recipes!  Use the highlighted links below to see the recipes and print them.

Remember when you were a kid and summer seemed to go on forever?

I grew up in a small town in Nebraska. Before being old enough to get a real job my summer days were filled with bike riding, hanging out down by the creek – swinging across it on a home made tree swing  – sometimes people fell in! I babysat my younger brothers (a set of twins) while mom worked. When they got old enough to be on their own I baby sat for other working parents in town for a mere 50 cents an hour! I would cook, clean and watch their kids. What a bargain they got.

All of the kids in town would hang out at the little town park – taking turns spinning the merry – go- round or waiting a turn for a swing.

Now I wonder how on hearth I walked barefoot on the gravel roads to get to my friend Judy’s house where we would take turns on her tree swing or lay across her bed chatting for hours on end.

We would ride our bikes around town and everyone who drove by would wave at you even if they didn’t know you, but most likely they did. When we got thirsty we took turns getting drinks out of the garden hose.

When it was too hot to be outside we would set up a board game in our basement, sometimes our Monopoly games might last a couple of days! We also had a ping pong table in the basement which was good entertainment.

When we got too noisy (with 4 kids in my family plus our friends we did get noisy) mom would chase us outside to run off our excess energy and give her a little break.

Those were the days!

Seriously – where has this summer gone?

Thanks for being here. Feel free to leave a comment or ask a question. I love hearing from you.

What are some of your favorite childhood summer memories?

Have you tried plantains?