I have come across so many beautiful and interesting ideas on Pinterest. I “pin” many of them but rarely do I get around to actually executing a version of my own. That is until yesterday. I am highly motivated to do things for our granddaughter Alma who turned one year old this week! I saw these gorgeous “cakes” made from watermelon and decorated with fresh fruit on Pinterest and I wanted to replicate one these works of art for Alma. She loves fruit and recently discovered how delicious fresh berries are so it seemed the like perfect cake for her. As often happens with Pinterest projects it was much more difficult to execute than it looks. My first attempt earlier in the week was a complete fail! I tried using a mini seedless watermelon and it ended up being rather mushy inside and I couldn’t cut a  nice round circle from it. Katy said I should have taken a photo of it and posted it as a “pinterest fail.” I tried to find a video or tutorial on how to make one of these and came up empty handed. 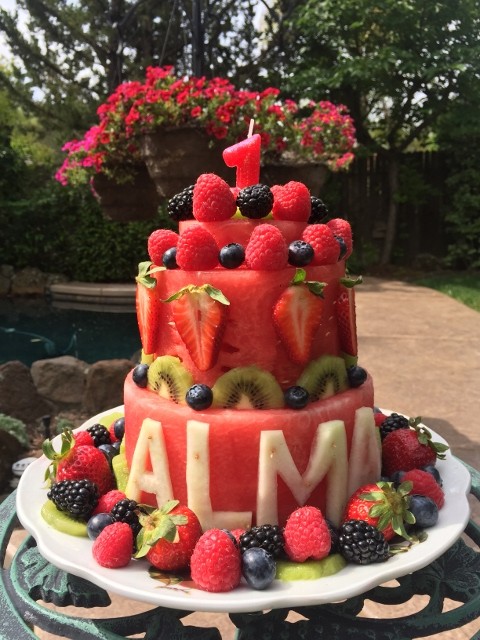 I wanted to attempt the watermelon cake again so yesterday I enlisted the help of hubby Tom. We started with a large watermelon from Costco. I really wish I had documented the making of this piece of art work but I was busy getting all the berries washed and prepped for fruit kabobs and decorating the cake should it turn out. As you can see hubby Tom was quite successful at cutting the watermelon into beautiful layers. 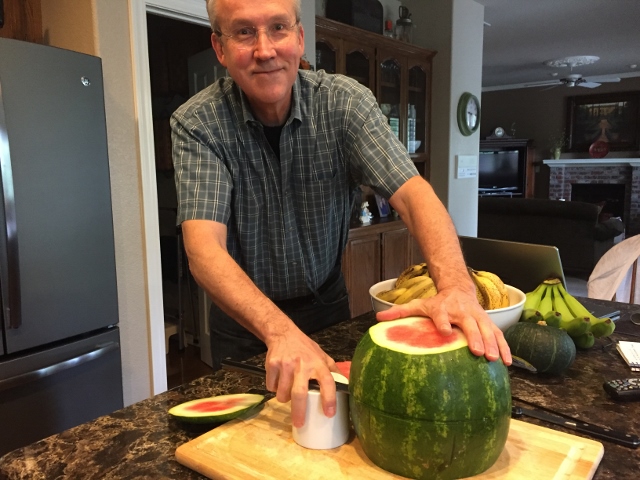 Tom has excellent problem solving skills so he gave some careful thought to his technique for cutting a level chunk of melon to be the base of the cake. True to his male nature at first he was trying to figure out if any of his “power tools” could be of help! He quickly nixed that idea and went low tech instead. He started by cutting the ends off the watermelon. That gave him a nice flat surface to stand the watermelon on.  The thickness I wanted for the bottom layer was about the same height of a coffee mug. Using the mug as a steady guide for his knife that is resting on top of it sideways he carefully nudged a thin bladed knife around the watermelon until is was completely cut. 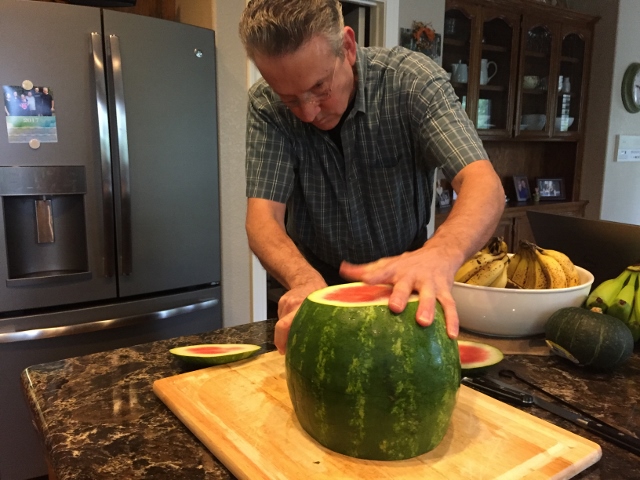 Once that was done he did the same thing for the second and third layers. Now he had level slices to work with. The next step was to cut off the rind and have nice round layers. Unfortunately I don’t have photos of that process – I know isn’t that a pity? I can tell you how he did it though. He took a plate that was the right size and placed it on top of the watermelon slice. Then using the same nudging technique with a narrow bladed sharp knife he cut around the slice using the edge of the plate as his guide, keeping the point of the blade on the cutting board and keeping the knife vertical while he nudged his way around. This technique facilitated a clean cut. He used smaller plates for the other layers and used the same technique. I was so delighted with hubby Tom’s ability to execute this project. He is my hero! 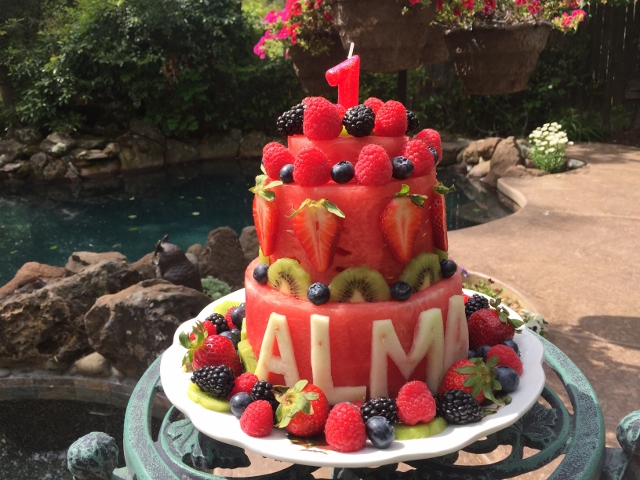 Since we were transporting this cake to the park we secured the layers together with tooth picks. Then the fun began as I started to decorate it with berries – one of Alma’s favorites foods. I thought it would be fun to personalize it with her name. Hubby Tom used the watermelon rind and carved out the letters. He did the “A” first and he made it thick so that he could just slice it in half and then he only had to make one “A” and they were perfectly the same. Yep – he’s clever like that. We secured them to the watermelon layer with toothpicks. The berries on the top of the layers are also secured with tooth picks. The kiwi slices stayed in place without any additional help. I used a concave serving plate to capture any liquid that would drain from the watermelon and there was a little bit but not much. The fruit around the base is just randomly placed and because the plate is slightly angled none of it moved or fell off in transit. A number 1 candle was the finishing touch. 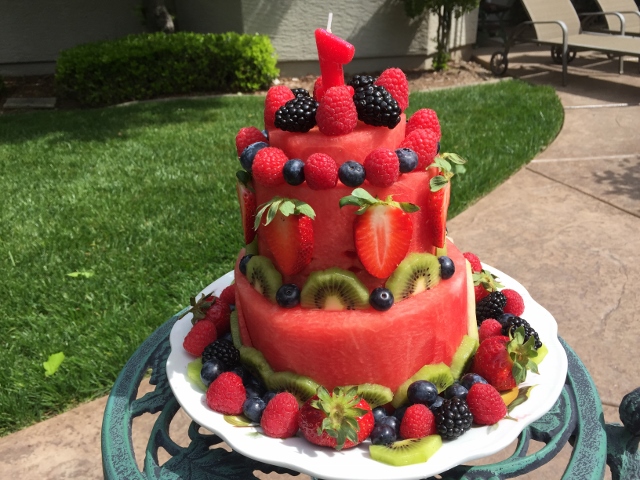 A view of the back – just as pretty as the front.
Nutmeg Notebook

Everyone at the party loved the cake and yes we did cut into it and served it along with vegan cupcakes, fruit kabobs and hot tea. 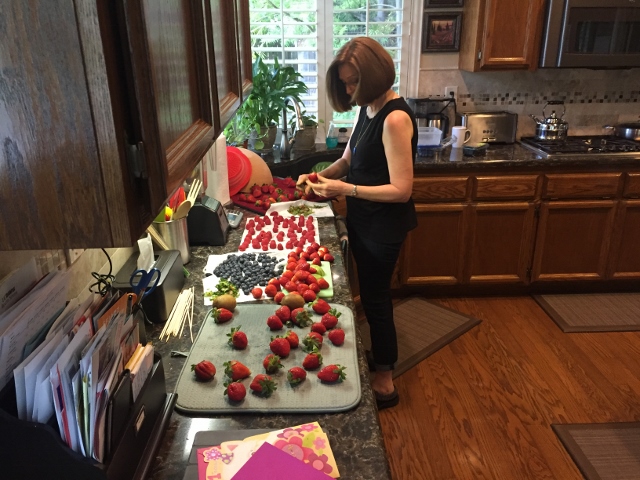 Tom took this candid photo of me prepping the berries. 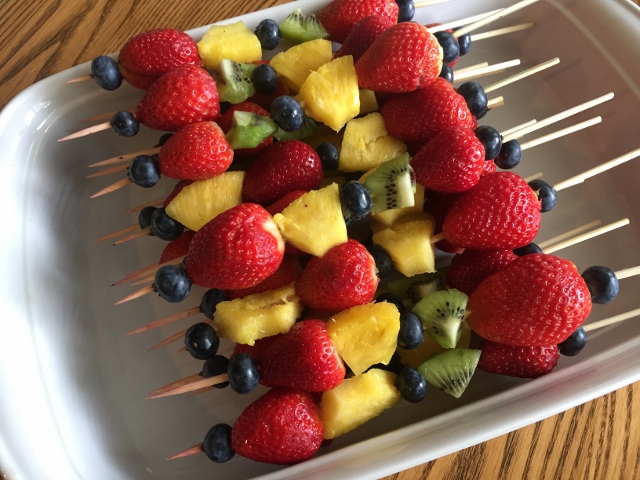 Fruit kabobs are perfect for picnics and buffets. They don’t require a plate or utensils. Finger Foods! 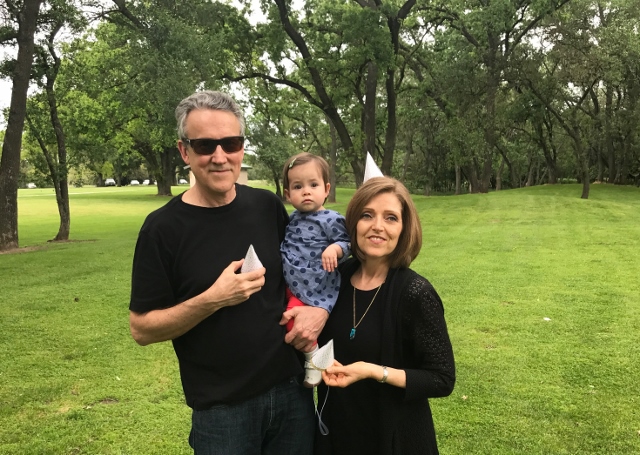 Alma and Tom didn’t seem to enjoy the party hats! 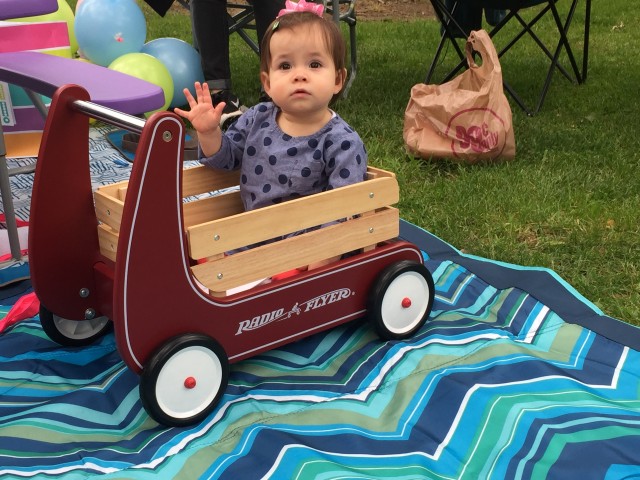 She is ready to roll in her new Radio Flyer walker/wagon! 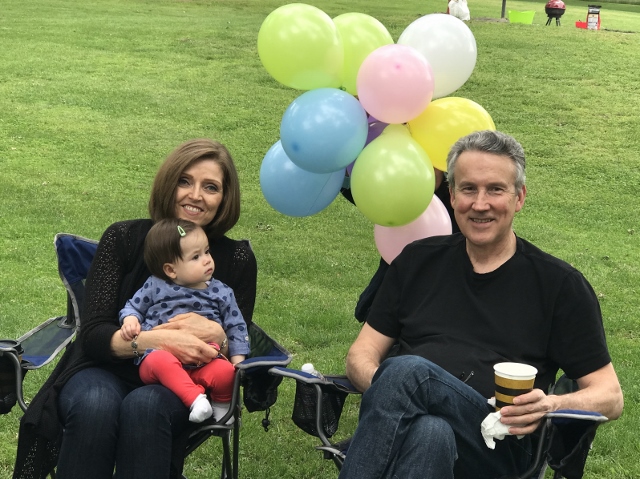 It was a beautiful afternoon at a lovely local park that was full of shade trees and the weather was incredible. We even managed to get everyone to go on an hour long hike! That’s our kind of day.

We had no idea how much love and joy Alma would bring into our lives. Children are indeed a blessing from God and our lives are truly blessed. Alma has so many family members on both sides that love and cherish her and feel blessed to be a part of her life. She is growing up surrounded by love and goodness. We couldn’t ask for anything more.