I just finished dinner you guys and it was so amazing I had to sit down and post about it right away! The inspiration for this meal came from an incredible meal I had back in November. While visiting my parents in Nebraska my mom and had drove to Omaha and had one of the best meals of our life at Isa Moskowitz Vegan restaurant called Modern Love. One of the scrumptious entrees we tried was a hearty lentil chili served in a bowl with big chunks of oven roasted squash served right in the bowl with the chili. It sounds really simple and it is but the flavor is anything other than simple. 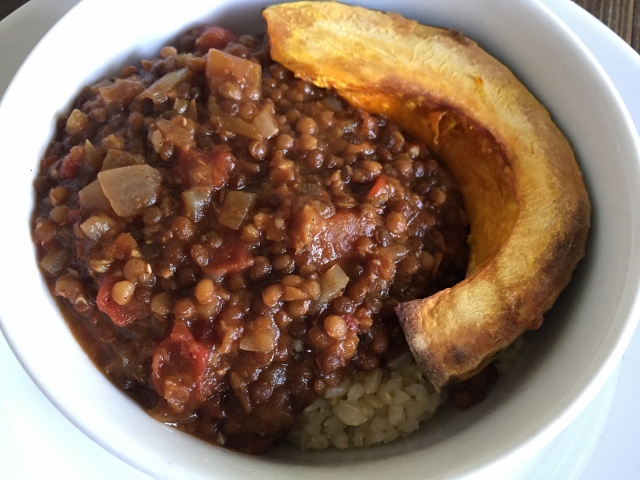 We have all most likely enjoyed some form of vegan chili that includes squash in the recipe – cooked right along with the other ingredients and it’s yummy. This method is even better. When you oven roast squash it becomes sweeter and gets a wee bit caramelized which adds even more depth of flavor. Now imagine the flavor of a spicy chili tempered by the sweetness of oven roasted squash. The hubby and I were all over this meal – oohing and aahing over the flavor for the entire meal! It was amazing! 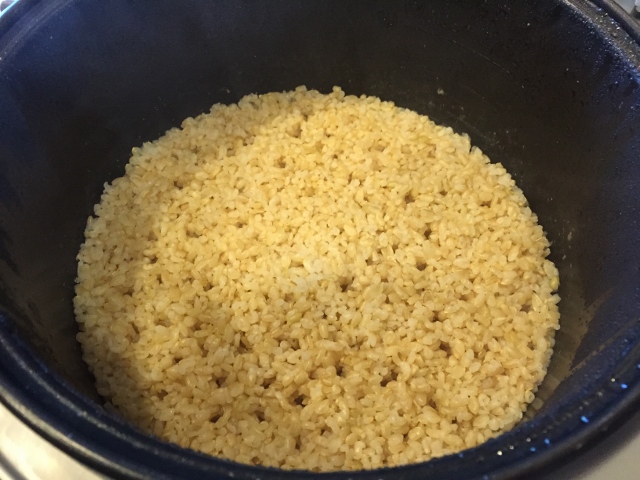 To get this meal together without much fuss I started off by getting some short grain brown rice cooking in the rice cooker which takes about an hour. While it was cooking away I began prepping the chili. 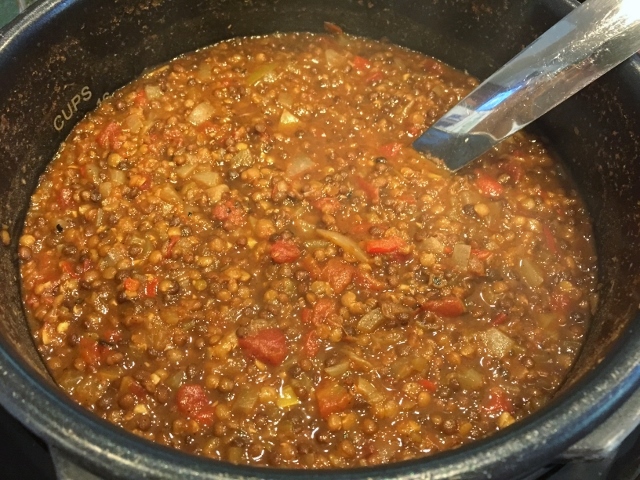 I don’t know what recipe Isa uses at the Modern Love restaurant so I chose a tried and true recipe. This is one of my favorite chili recipes that cooks up quickly in the pressure cooker. If you don’t have a pressure cooker – no worries you can also make this on the stove top.  It’s Susan’s recipe from Fat Free Vegan Kitchen blog and its called Black & Red Lentil Chili. The only thing I do different is double the recipe – it still fits in the slow cooker and it  cooks for the same amount of time. It also freezes really well so by doubling the recipe I have some extra for future meals. Tonight I used one green bell pepper and a red one. I like to toss them in the food processor so we don’t have big chunks of pepper. I think this method helps make the chili thicker too. 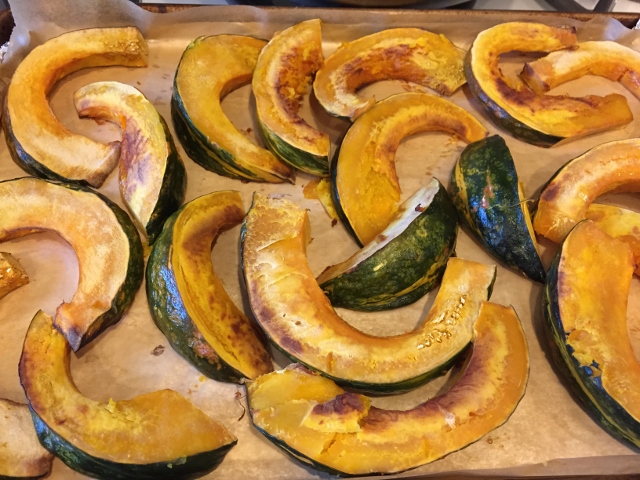 Now that the rice and chili are cooking prep your squash. Tonight I used a Kabocha squash – I like that the skin gets tender while it cooks and you don’t have to peel it! Use whatever kind of sweet winter type squash you have. like a butternut or acorn squash. To make the squash easier to cut into use a sharp knife and cut a few slits in the whole squash – after you have washed it of course. Then place it in the microwave for 5-6 minutes on high. That is just long enough to soften the skin enough that it will cut much easier. Slice it open, clean out the seeds and cut it into half inch thick slices.  I roast mine plain no seasoning required, in a preheated 400 degree oven on parchment paper for 30-40 minutes. Turning the pieces over after about 20 minutes. It gets all caramelized, sweet and scrumptious. 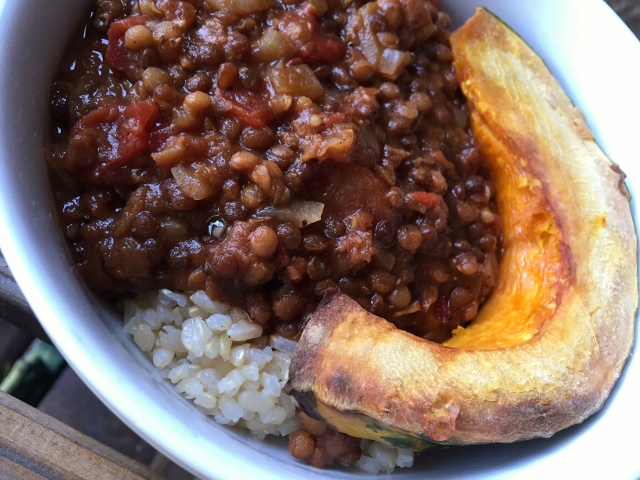 To assemble scoop some hot brown rice in the bottom of the bowl, top with a generous serving of the chili and place a big chunk of that oven roasted squash on top. When you eat it be sure to scoop up some squash with every bite. I am sure you will find yourself oohing and aahing over this meal much the same as we did tonight. Every bite was a burst of flavor!

The best part is that you will have plenty of leftovers for future meals. We will be enjoying this meal again tomorrow. You can freeze some if you wish and enjoy it all over again in a few weeks on a night when you don’t have time to cook. The leftover rice can be used for lots of other meals later in the week. Oven roasted squash and brown rice are amazing cubed and tossed in a green salad with a balsamic vinegar dressing. The Lentil Chili takes on a different taste when served over a baked potato or a sweet potato in stead of the rice, add some steamed greens and you have changed it up yet again. Tomorrow when the rice is cool I will freeze some of it in 2 cups portions then if I need some for a recipe or a quick meal its ready to go.

Cooking for a whole food plant based diet doesn’t get any easier than this!

If you try this (and why wouldn’t you?) please come back and let me know what you thought of it. I love getting  your feedback.

Please leave a comment and let me know you were here.

Do you like short grain or long grain brown rice?

I prefer the Lundberg Organic short grain – it has a nice chewy bite to it! I buy a huge bag of it at Costco and I store it in the freezer to keep it fresh.