At my yearly phsyicals in 2011 and 2012 a pattern started to emerge with my LDL choloeserol as it was on the rise. Despite the fact that I was following what I thought was a healhty low fat diet all the while exercising, staying active and trying to be healthy. I rarely ate red meat, junk food or anything fried. I only ate low fat dairy and egg whites instead of the whole egg. My doctor said genetics were to blame but not to worry becuase he could prescribe statins for me if it continued to rise. I left that appointment mad and determined to fix it without going on medication. After much research on the internet, reading books and watching documentaries about eating a WFPB (whole foods plant based diet) I took the plunge in the Spring of 2013 and dove head first into converting to a WFPB diet. Hubby Tom was on board to modify his meat centered diet and agreed to eat a plant based diet at home. You can read more about those early days here. 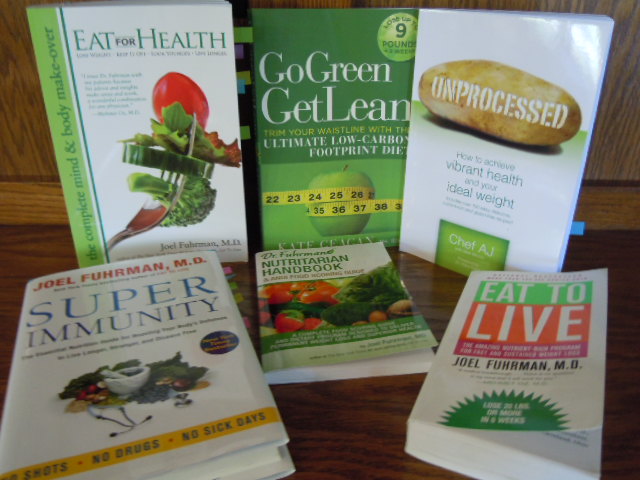 I read these books to begin with as well as watching several documentaries. 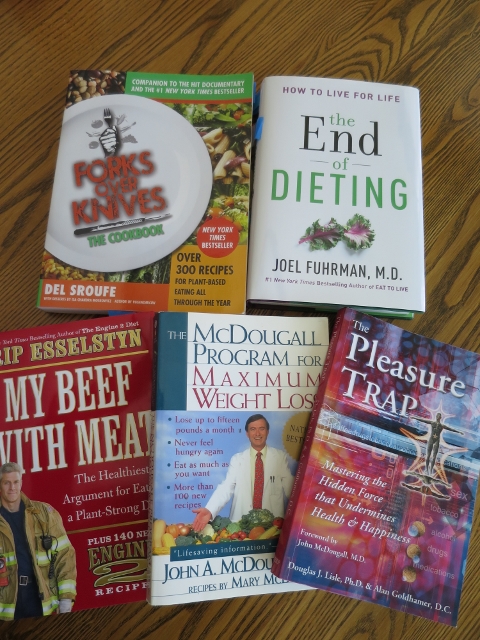 These books have also been very informative.

As you can imagine I was quite eager to see my doctor for this years physical and to discover if the WFPB diet had lowered my LDL cholesterol like I had hoped it would. We made our appointments, did our lab work and were eager to see our primary care physcian. The week before our appointments the doctor’s office called and said they needed to reschedule – it was pushed back a month! Those weeks flew by and again we got another call and are told the appointments needed to be rescheduled. Apparently our doctor is out with an illness. Of course they don’t say what that illness is but they do tell us he is coming back. This time we asked to see one of his associates as the waiting was torture. It’s not all that often that I am excited about going in to see the doctor! 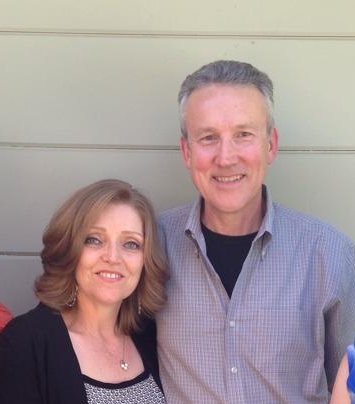 Drum roll please! The results were outstanding! Our cholosterol numbers are amazing!

This was all accomplished with a whole foods plant based diet and exercise. No drugs!

I was dissapointed that I didn’t get to see the look on my regular doctors face when these results were revealed. However the doctor I saw was impressed. I told her that I switched to a whole foods plant based diet. Her response was that she honestly didn’t think she could do what I had done! She made the comment that it must have been so difficult to make the change. I told her it was a challenge at first but we love the food we eat. We couldn’t be happier with the results. Thanks to a whole foods plant based diet I won’t ever have to go on statins for high cholesterol. We have reduced our risk for heart problems and cancer. It feels great to take charge of our health. I would like to point out that hubby Tom has not given up all animal products. He eats a WFPB diet about 70-80% of the time and 20-30% of his diet includes animal products. He usually gets his meat fix when eating out. Even though he is eating some meat he has had amazing results.

Another Hurdle To Overcome.

I just can’t seem to get a break. Also during this doctors appointment I shared some symptoms with the doctor that I had been experiencing for a long time. I had been chalking most of them up to the fact that I have been living with chronic foot pain for nearly two years. Yes, even after having had foot surgery I have had chronic foot pain, nerve issues, swelling and pain daily. It is getting better but recovery is a long road. I figured the stress of living with pain was causing fatigue, lack of sleep, difficulty losing weight and memory issues. The doctor listened intentlly, asked some more questions and then shared that she suspected it was a thyroid issue and sent me for more lab work.

She was right. The results showed that I have hypothyroidism. This is an under active thyroid. My TSH (thyroid stymulating hormone) is elevated and my T4 is low.

There is a long list of symptoms and I seem to have a good many of them. Who knew! The good news is that there is thyroid medication that can correct the problem. The bad news is you have to be on it for life!

Get this – hypothyrodism can cause eleveated cholesterol levels. So even though I have had this condition with the WFPB way of eating I was still able to lower my LDL. Kudos to my way of eating! It can also make it nearly impossible to lose weight. Even though I have been eating a WFPB some extra weight has been so difficult to lose. If I indulge just a little I gain – it’s been so frustrating. Plus people who eat a WFPB diet usually have tons of energy and I found my energy level was slowly going down hill in the past 8 months or so.

I started taking thyroid medication last week. Initially it made me even more tired than I was before. I experienced a little dizziness but in the past couple of days I have started to feel better and more normal. Now I am feeling hopeful that the meds are going to work for me. Another blood test in 6 weeks will reveal what’s happening. Then the meds can be tweaked until we get it right. Yeah! I look forward to feeling better.

Today I am having some down time as I prep for my first colonoscopy. It’s not fun but you have to do what you have to do. It’s just a routine test for my age so I don’t expect them to find anything unusual.

Sorry I haven’t been posting lately. I just haven’t had the energy and the focus to be able to do it all lately. Hopefully as I get this thyroid condition corrected I will be able to function better and get back to a regular posting schedule.